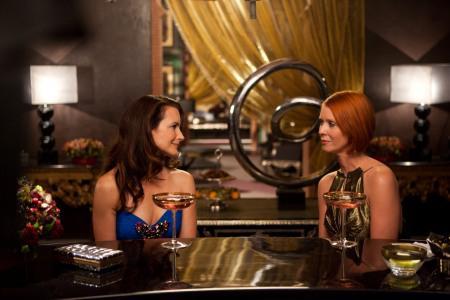 Autism and Sex and the City

Ok, I know there’s probably more than a few of you wondering where I’m going with this one but stay with me, it’s actually more Sex in the City 2 than the original but here’s why.

I’ve always been a big fan of the show and when the movies came out they were a must see. The other night I was watching Sex and the City 2 and the scene came up where Miranda and Charlotte are sitting at a bar drinking cocktails discussing motherhood.

For those of you that aren’t fans of the show, Charlotte is the one that always believed in love and all she wanted was a husband and a family. Miranda was the high flying lawyer that was all about women’s equality and being successful, not relying on a man and being able to provide for herself.

At the end of the day both of them end up pretty much in the same situation, married with children, and to quote Seinfeld “Not that there’s anything wrong with that”.

So I was thinking, who was I?

Well in hindsight I was pretty much Miranda (without the law degree). I was the one thinking they were going to go all the way to the top of their corporate career (which no longer exists for me now), I wasn’t having any children and if I did get married (which I never thought I would do),  he better just hang on for the ride.

Well clearly something changed along the way.

At this stage you’re probably wondering what I’m talking about, well on the show Miranda and Charlotte are discussing the difficulties around having children and raising them. They talk about the loss of their own identities and coping with the day to day struggles.

As I watched this all I could think of was in the real world we don’t all have nannies and live in housekeepers, we don’t wear designer clothes and we can’t just drop everything and go to Abu Dhabi for a week.

Whatever your situation though, mothers do have one thing in common, somewhere along the way of having children we lose ourselves and this isn’t exclusive to those of us that have children with additional needs.

Before I had Zac I had Aaliyah and I even struggled with that. Something changed when I had a child, I became invisible, I wasn’t me I was someone else, the problem was that I didn’t know who that person was.

As far as I was concerned the woman I became wasn’t interesting, her best conversations revolved around breastfeeding and changing nappies, she was sleep deprived and she hadn’t had an adult conversation for months.

After beating myself up about this for awhile I took a step back and noticed the conversations happening with other new mothers, many of them were feeling the same way I was.

Their conversations were focussing on who they were before children, they were more about what they used to be and do as opposed to what they were now doing (which was pretty much what I was doing). When you’re in the midst of going through this though, it can be really difficult to see the light at the end of the tunnel.

Thankfully now my kids are teenagers, very self sufficient (compared to back then) and I’m slowly getting to work out who I am again.

So what did I get out of this movie?

It doesn’t matter how much money you have or how much help you may have as a mother, motherhood is hard so imagine how hard it is for those who have children that need way more support and attention than your regular functioning child.

We’re mums and we’re all doing the best we can with what we’ve got. None of us are perfect but we need to support each other because our ultimate goal is the same. We all want to raise beautiful, kind, loving adults who are accepting, thoughtful and successful in their own right.

To keep updated with the latest blogs, books and giveaways