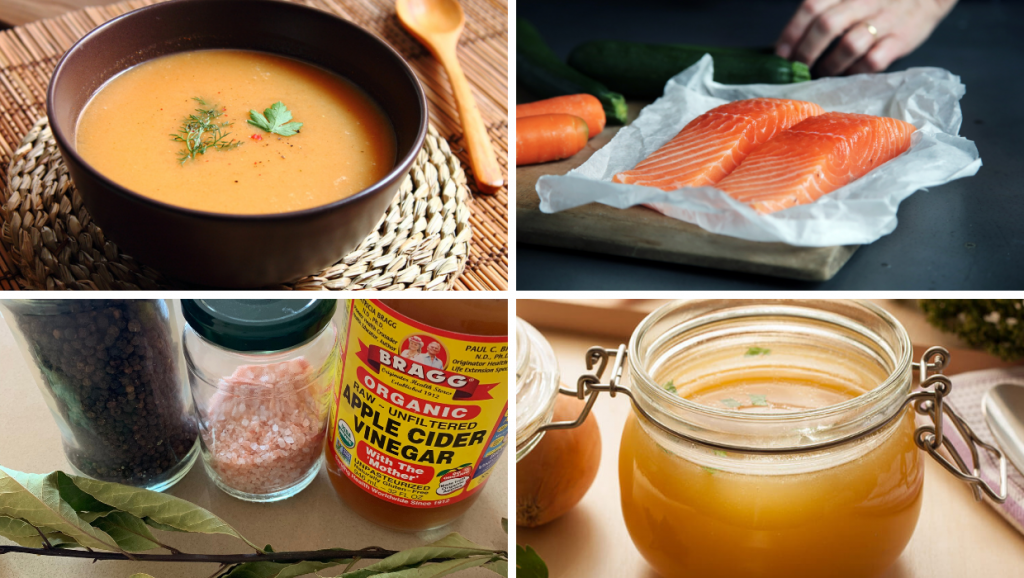 It’s hard to believe that 6 years ago we started The GAPS™ Diet as a family….. At the time, when we started the protocol I really didn’t know how it would all turn out but 6 years down the track I can absolutely say, without a doubt, it was definitely worthwhile. So, given how beneficial it was and continues to be for our family I thought I’d take a little trip down memory lane to share some of the high’s and lows of the experience.

To take a step back, for those of you that don’t know what GAPS is, it stands for Gut and Psychology Syndrome or Gut and Physiology Syndrome. It’s a gut healing protocol that was originally designed by Dr Natasha Campbell-McBride for her son who has Autism and she felt there was more to it than just a neurological condition.

I totally agreed with the sentiment so for that reason went to Sydney to train with Dr Campbell-McBride so we could do it as a family and find out for ourselves, given out son’s Autism diagnosis and my need to do as much as possible for him.

The thing that surprised me the most was the benefits we experienced, not only was there a drastic change in our son, the entire family experienced significant benefits to our own individual health which was far more than I ever expected.

So to recap the first few days…

This started with a bowl of soup and a cup of warm meat stock, infused with a teaspoon of home made sauerkraut juice (thankfully you can now buy the sauerkraut juice, one less thing to do).  In fairness it did go down fairly well at the time but I assume it was just the novelty factor of it all.

Oh what I should mention is that to get Zac to comply with the whole thing I took away all technology, including his beloved iPad…  to get time on this he was and still is generally prepared to do just about anything…  so to get the iPad he had to eat what I put in front of him.

With this in mind though, by the afternoon of day 1 the soup novelty factor had well and truly worn off with cries from Zac “not soup AGAIN!!” ringing through the house..  At least my daughter was still trying to be supportive at this stage.

By the end of the day the “die off” had begun, with multiple trips to the bathroom by some members of the family, sore tummies and an early night.

“Oh God” they all said as they woke up to soup AGAIN… Surely it wasn’t another day of soup? Suddenly no one was that hungry, there was minimal soup or stock eaten or drunk that day but we did manage to get through.

We finally moved onto Stage 2…  never had I seen my kids inhale a stew but that’s what happens when it’s that or soup on offer. It was stew for breakfast with a generous serve of meat stock on the side, slowly increasing the amount of sauerkraut juice being taken each day.

By day 3 we had experienced some pretty average die off reactions, none of which I need to relive with you all but needless to say it was not our finest day.

The evening of day 3 brought about tears and tantrums (and that was just me)…  it felt like an impossible task, it was too hard, I felt awful, everyone was hating the diet and probably me a little bit..  and the kids were starting to wonder why they didn’t get a “normal mum” like all their friends.

We soldiered on despite the bad day, but on day 4 I did wake up to THIS on my whiteboard. 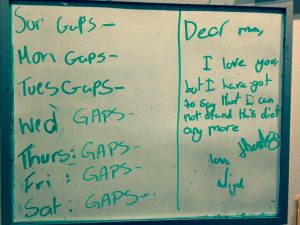 “Dear Mum, I love you but I have got to say that I can not stand this diet anymore, Love Aaliyah”

Well..  guess they weren’t loving it!!

These days became a blur of everyone feeling flat, nauseous, tired and generally unwell.

During this time the focus was just on keeping everyone eating as well and as much as they could tolerate, drinking lots of water, sleeping, watching TV and just generally taking it easy until…  that wonderful day when the cloud lifted and there were no die off symptoms anymore, everyone was starting to feel pretty ok, just a bit tired, still with no reactions it was time to try adding in some more foods, so Stage 3 here we come.

Stage 3 has arrived with the introduction of Nut Pancakes.. I remember the excitement on Zac’s face when I told him we were having pancakes for afternoon tea.  I wasn’t sure how they’d go given they’re not exactly like the normal soft fluffy pancakes you would eat on a Sunday morning.

They funny thing was though, that given all they’d eaten for the past week or so was soups, stews and meat stocks, Zac inhaled the pancakes like they were the best thing he’d ever eaten. On top of that he got right into scrambled eggs with Avocado as well..  Stage 3 was a game changer…

Just as I thought it was all going well though Zac became a small Jeckle and Hyde 3 days into Stage 3…  One minute he was happy and laughing and the next hes was screaming and crying… ding ding….  “die off” round two!!!  I think die off won that round!!!

So after we all got over that hellish time things calmed down, the pancakes were losing their appeal and it was time to look at how everyone was travelling and could we possibly move to Stage 4..  thankfully the answer to that was YES!!

Stage 4 – I can’t remember at what point we moved on but  we got here:

This saw the introduction of “Nut Bread”, of which I made a sweet and savoury version… Surprisingly the savoury version was far more popular than the sweet one (it may have been the tomato paste and herbs giving it that slight “pizza” flavour) and Zac was telling anyone that would listen how AMAZING the bread was.

By the time we hit this stage, Zac was like a different child. His food choices had expanded ten fold from when we started. Aaliyah was cooking breakfast for us most mornings (she was 9 at the time), she was calm, happy and focussed. Zac was doing his homework, originally we would be fighting to get him to write even a sentence but all of a sudden he was writing a few lines with NO complaining.

So we plodded along finally making it to The Full GAPS Diet and followed the protocol for close to a year before reintroducing some foods.

The things to know was Zac was diagnosed when he was just under 3 years old, he was aggressive, non verbal, unresponsive and frankly very strong for a child his age. I lived with the concern in the back of my mind…  what happens when he’s to strong for me if I don’t get things under control?

Thanks to this and a lot of hard work he is almost 13 years old now, at mainstream school and doing extraordinarily well. He’s charming, funny and very quick witted who shows no signs of Autism traits to the untrained eye.

Yes he still has Autism and that’s what makes him who he is but what I learned through this is it didn’t have to define his future. Sometimes things that are the hardest to do are the most rewarding. I’m so glad I trained with Dr Natasha Campbell-Mcbride and went down the path of becoming a GAPS practitioner.

I’m thankful we did the diet as a family and I’m thankful I’ve had the opportunity to help many families like ours.

To get started on The GAPS Diet, book an appointment with Sonia